I recently acquired the Fabrique Nationale Herstal SCAR 17s. It was a rifle that I have wanted for many years, but it was always out of reach due to how much it costs. 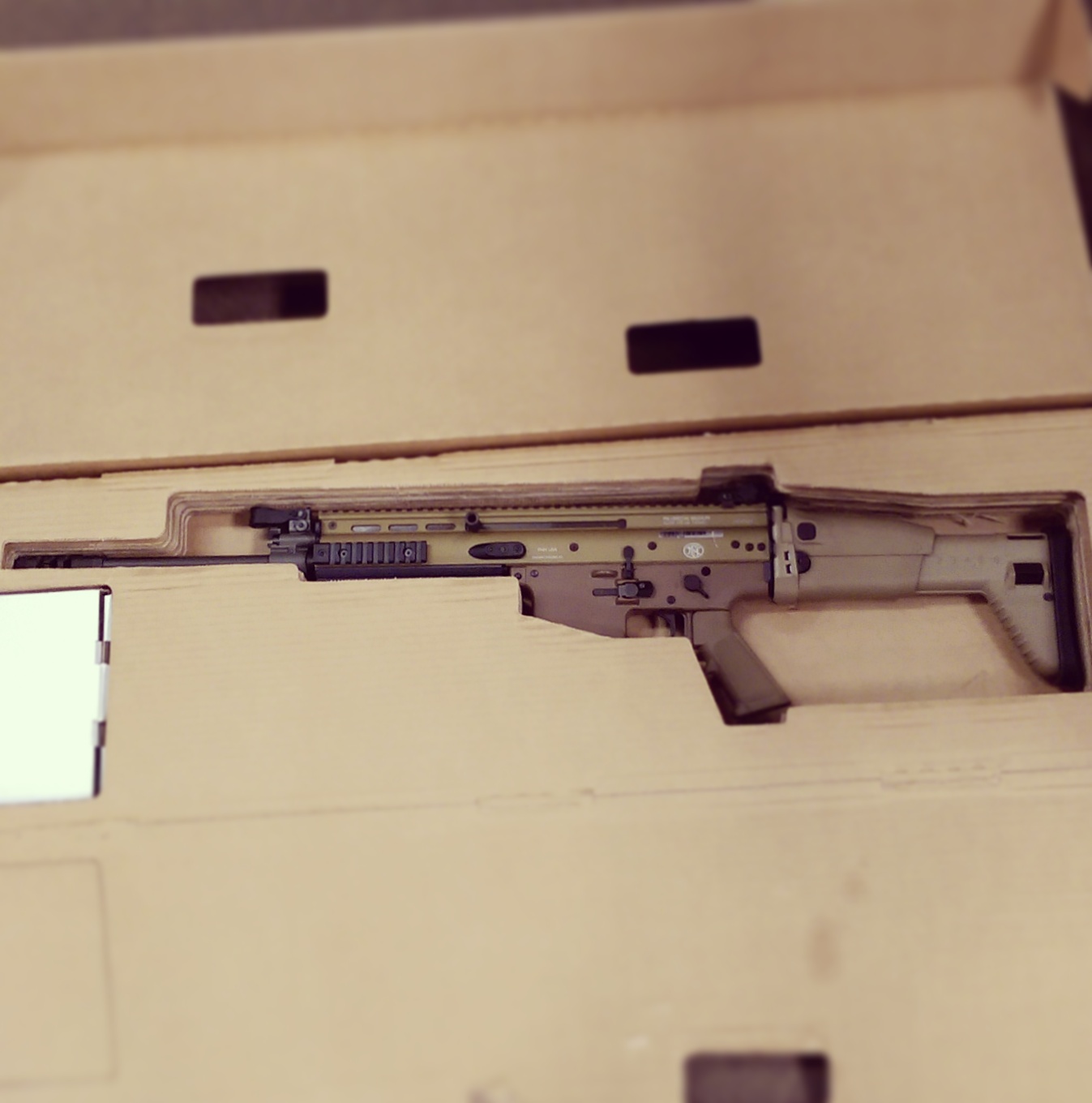 In order to obtain the funds for the 17s, I had to sell several of my firearms. It was worth the sacrifice and I have no regrets. 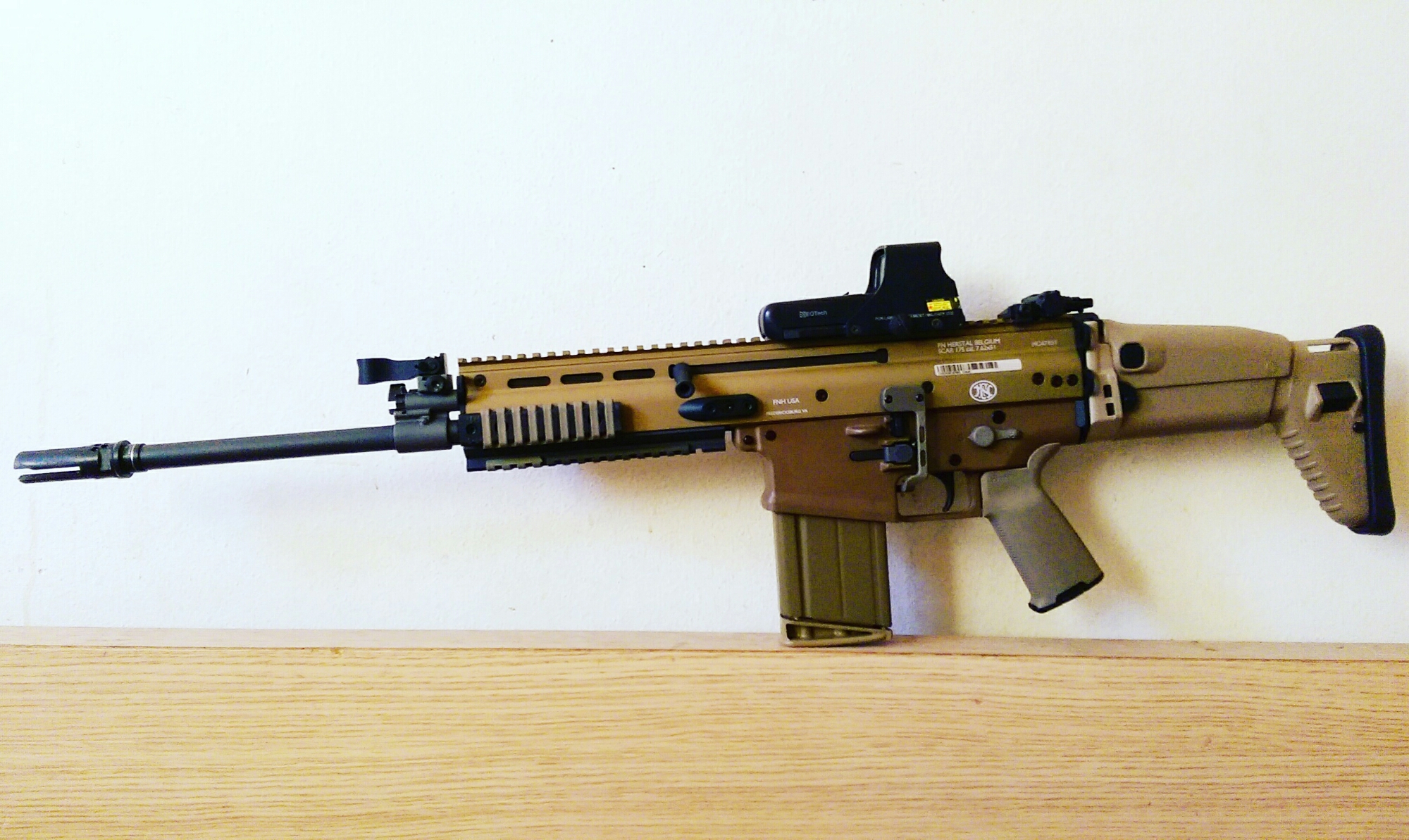 SCAR stands for Special Operations Forces Combat Assault Rifle. This rifle isn’t new and there are many reviews out there so I will just focus on my own experience with mine.
The SCAR 17s is based off of the SCAR H (Heavy), which is currently in service with US SOCOM. It is chambered in .308 Winchester or 7.62x51mm. The difference is that the 17s is semi-automatic only, whereas the Heavy is select-fire.
The 17s comes in matte black or FDE (Flat Dark Earth). I got mine in FDE and every single rifle in FDE comes with multiple different shades of FDE. The upper and lower receivers and stock all are different shades of FDE. This was expected and I don’t mind it as it naturally breaks up the rifles visual profile. My aluminum upper receiver came in bronze, the polymer lower is almost dark brown and the collapsible stock was Magpul FDE. 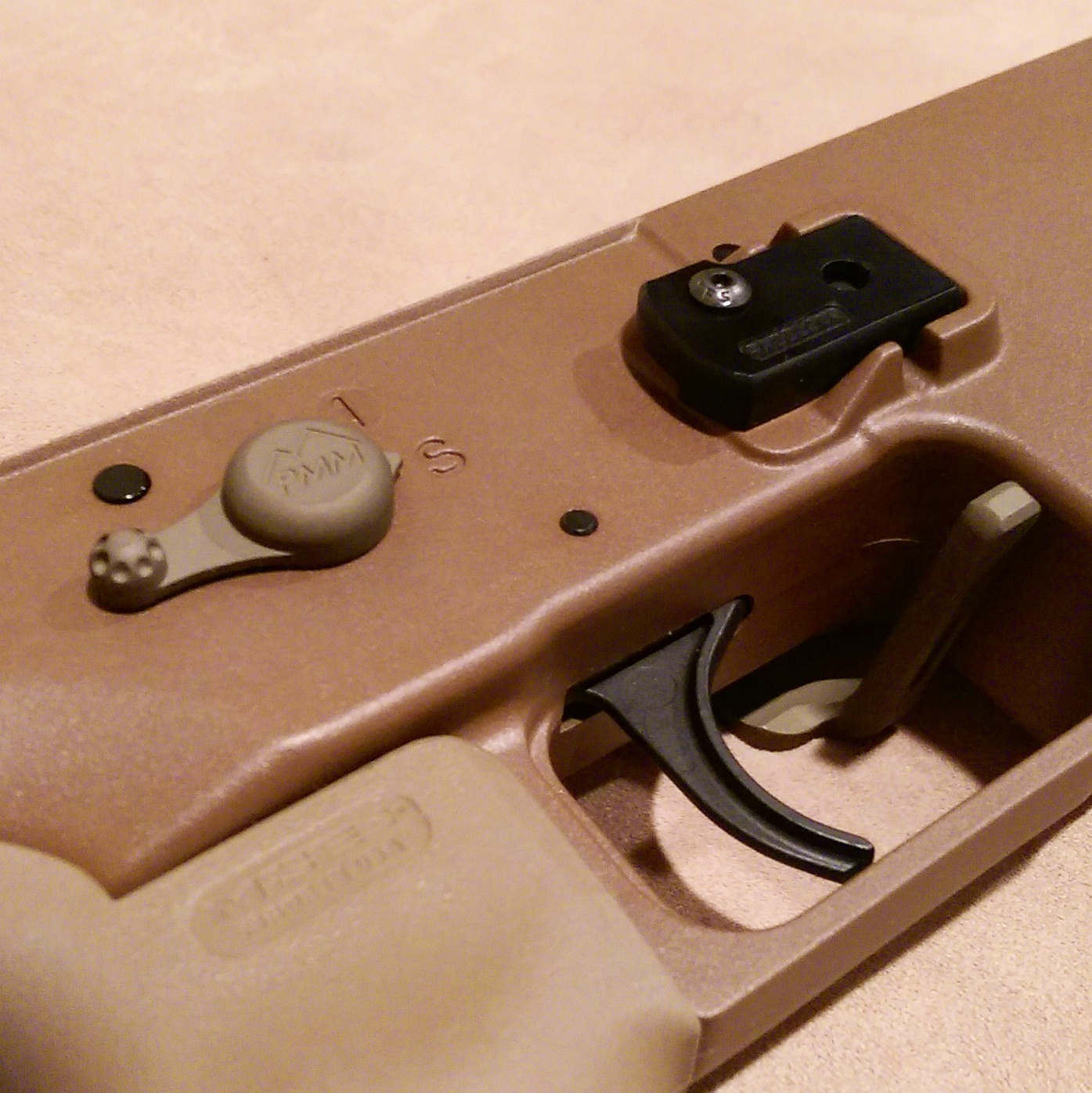 Before I continue, this rifle had to be California Neutered in order for it to be legal for me to possess. Most people don’t know all of the restrictions this state had on law abiding gun owners. Both of the magazine releases on the 17s have Raddlocks installed and the stock has a Raddlock stock block disallowing it to fold. Why? The state law requires a tool to release the magazine and the minimum length for a rifle in California is 30″. The 17s folded comes in at 28.5″.
I had some immediate upgrades that were installed before I took it out to the range. GG&G extended charging handles is a must have, it gives you the extra needed space to keep your fingers and knuckles to clear whatever optics you may have on top. I replaced the standard and cheap A2 grip with a Magpul MOE grip modified by Parker Mountain Machine. I also replaced both safety selectors with PMM ones, large on the left and small on the right. PMM’s BCD (Battery Control Device) was installed as well. All of these parts added a few more shades of FDE. 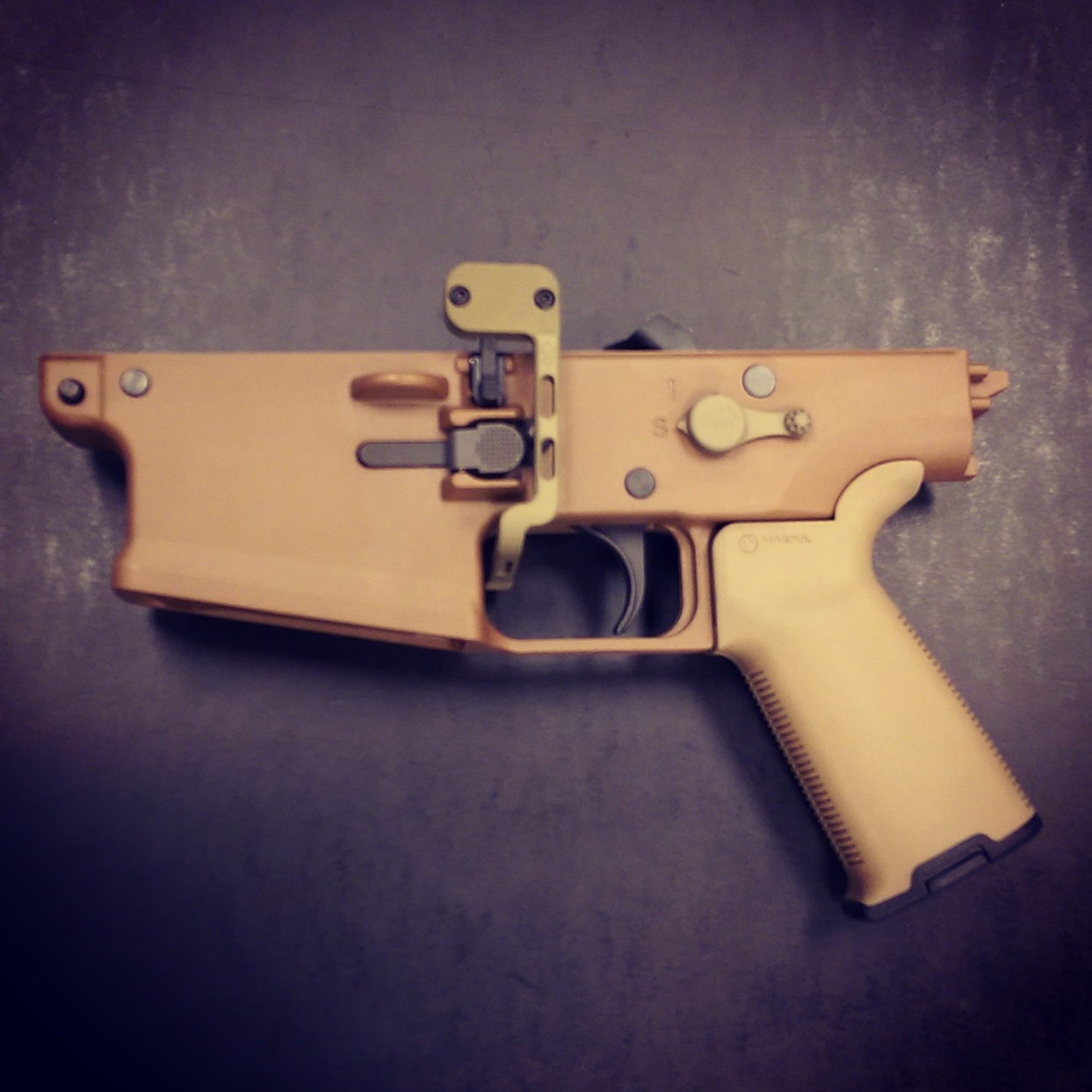 I replaced the PWS brake with Surefire’s new WarComp. The WarComp is mainly a flash hider with compensator ports on top to mitigate some recoil and keep the barrel flat during firing. 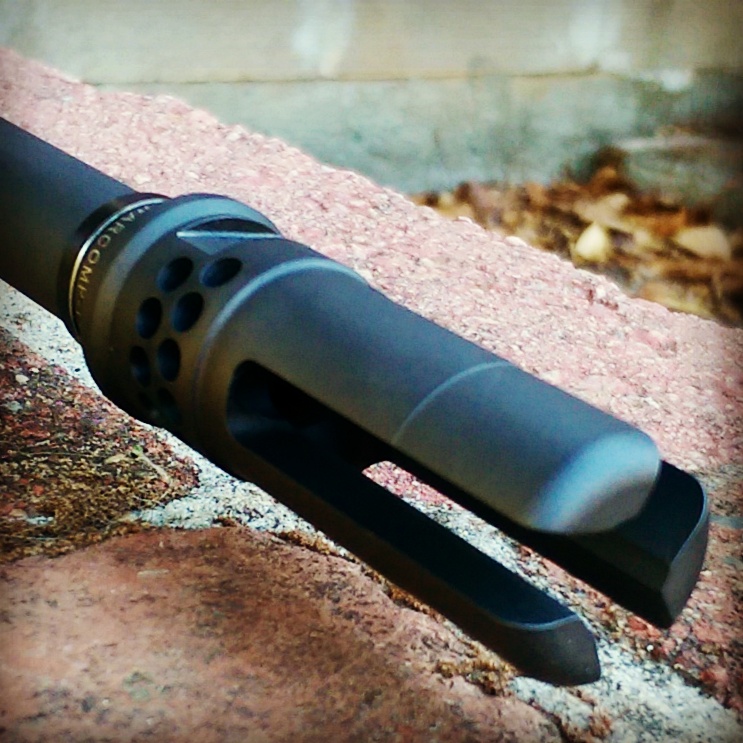 I placed an EoTech 552 HWS as a temporary optic for now. In the future I am looking at the XPS-2 with the G33 magnifier.
One advantage the 17s has over other .308 AR platforms is it’s weight. It is 8 lbs empty. It had a  short stroke gas piston operation, which will keep the bolt carrier group and chamber relatively clean.
I was able to squeeze in some range time last week at the local indoor range. I shot three rounds on the bench with a Harris Bipod attached. The EoTech 552 was set to the BUIS and after shooting it at 25 yards, I found that they were perfectly zeroed for 50 yards and no adjustment were required. Since I have the WarComp installed, the felt recoil was definitely noticeable but it works as advertised. There’s no flash signature and the barrel stayed level and flat leaving the recoil impulse going straight back. I have to admit my shoulder was a bit sore for a few days but you just have to suck it up, you’re shooting.308!
In my opinion, the 17s is the best semiautomatic .308 battle rifle for the price that you pay. It’s the lightest among its counterparts. As expensive as it is, it is actually in the middle when you compare the prices. There’s a reason that SOCOM chose it. It’s combat proven by our elite troops in the worst conditions. What this rifle can do is what sets it apart from all the others; you can maneuver it at close quarters, you can shoot long range, you can hunt with it. It pretty much does it all. Everyone of my friends and partners at work who have picked it up are truly amazed by how compact and light it is. When compared to my LWRC M6A2, the 17s is just a few inches longer and weighs just a hair more.

FN definitely succeeded in making the most technologically advanced battle rifle out there yet and I am happy to own one! 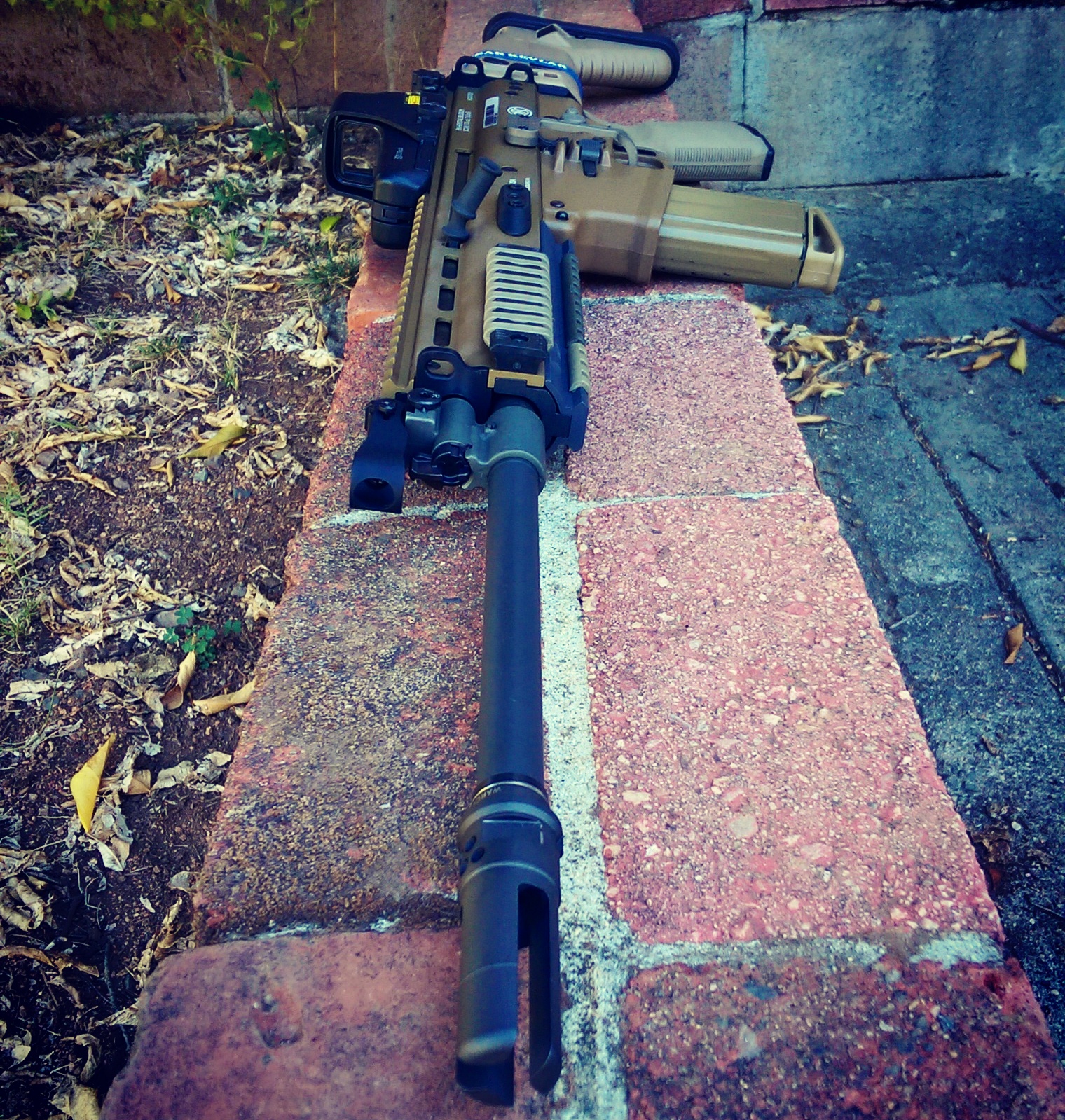