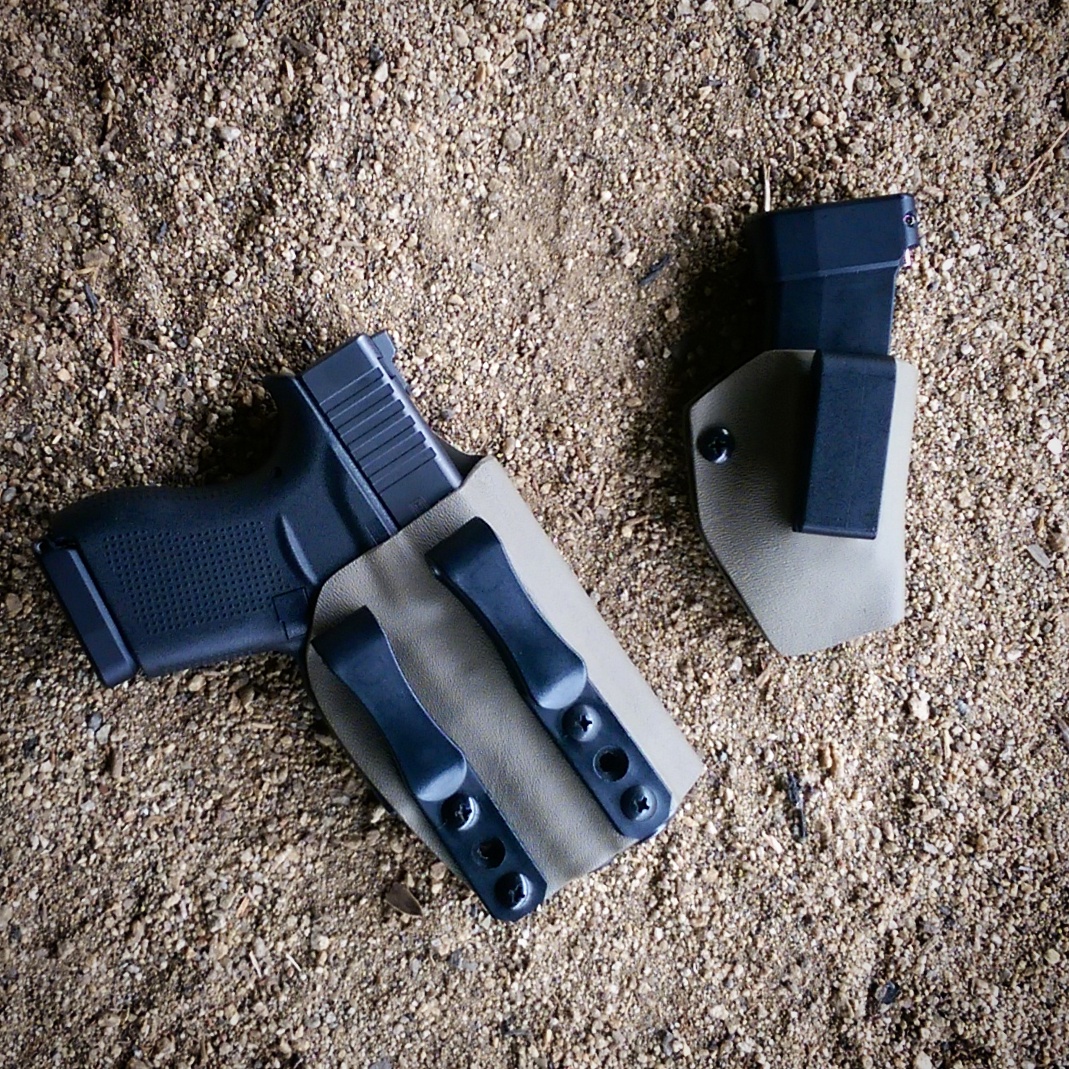 There’s a ton of options when it comes to custom kydex holsters. The hard part is finding the right fit for your needs because everyone has their own body shape and lifestyle. Johnny, the lead instructor over at Iron Works Tactical says it best, “Everyone is their own unique snowflake.” 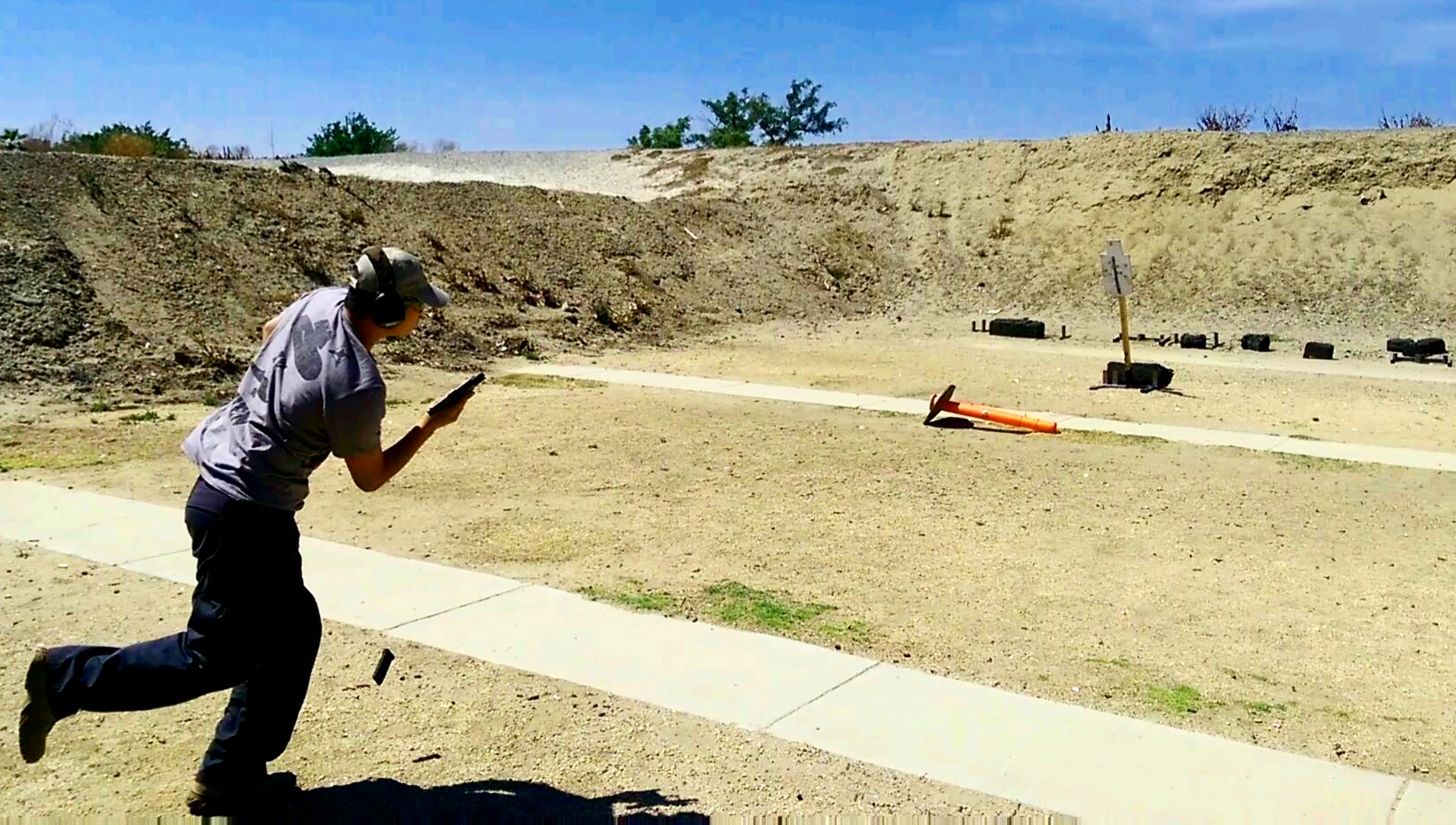 I recently attended the Iron Works Tactical EDC class and used some brand new kit made specifically for me by Mark, of Thomas Tactical Precision (@thomas_tactical_precision on Instagram)
I was invited to the class about three weeks prior by my friend Jeff, who asked me what I was going to run and what kit I was running (Glock 43). A few days later, he told me to ship one of my spare magazines over to Mark so he could work on some kit for me.
TTP is a one-man operation and Mark has a full-time job so with the short notice, he had to scramble to get the holsters out to me. He worked closely with Brett from Iron Works Tactical on this project for me. Brett had some ideas that he thought would make it a better holster with his extensive experience in this field. After four different designs, Mark finally got the finished product just a day or two before the class. He hand delivered the fresh new holsters to me at the range just prior to the class starting.
What I got was an Appendix In the Waistband (AIWB) holster and IWB magazine holder for my Glock 43, both in my favorite color, FDE.

I was running an AIWB holster made by Hickory Tree Holsters ever since I got my G43. It was a simple, single clip design and worked fine. It however would move and with my very active lifestyle, I found myself having to adjust and readjust the holster so it wouldn’t print, a bad thing to be doing as it is a dead giveaway to anyone watching.
The TTP AIWB holster was a lot different from my previous in appearance and in feel. The first noticeable feature was that it had two thin clips instead one. They are parallel but a bit off set. I requested a full sweat guard and Mark suggested that I get mole skin attached to add comfort. There are two retention adjustment screws at the bottom of the holster. I’ve never had an IWB magazine holder before, but I’m glad I had one for the class and it’s something that I’ll always have on me. I used to carry my magazines in my support side pocket. In the pocket, they’re not as easy to retrieve as you’d think in practice.
I put the holsters on and immediately I could tell and feel the difference in the AIWB, it was much more secure and stayed put, close to my body. The IWB took a little to get used to but once I found the right placement, it was good to go. 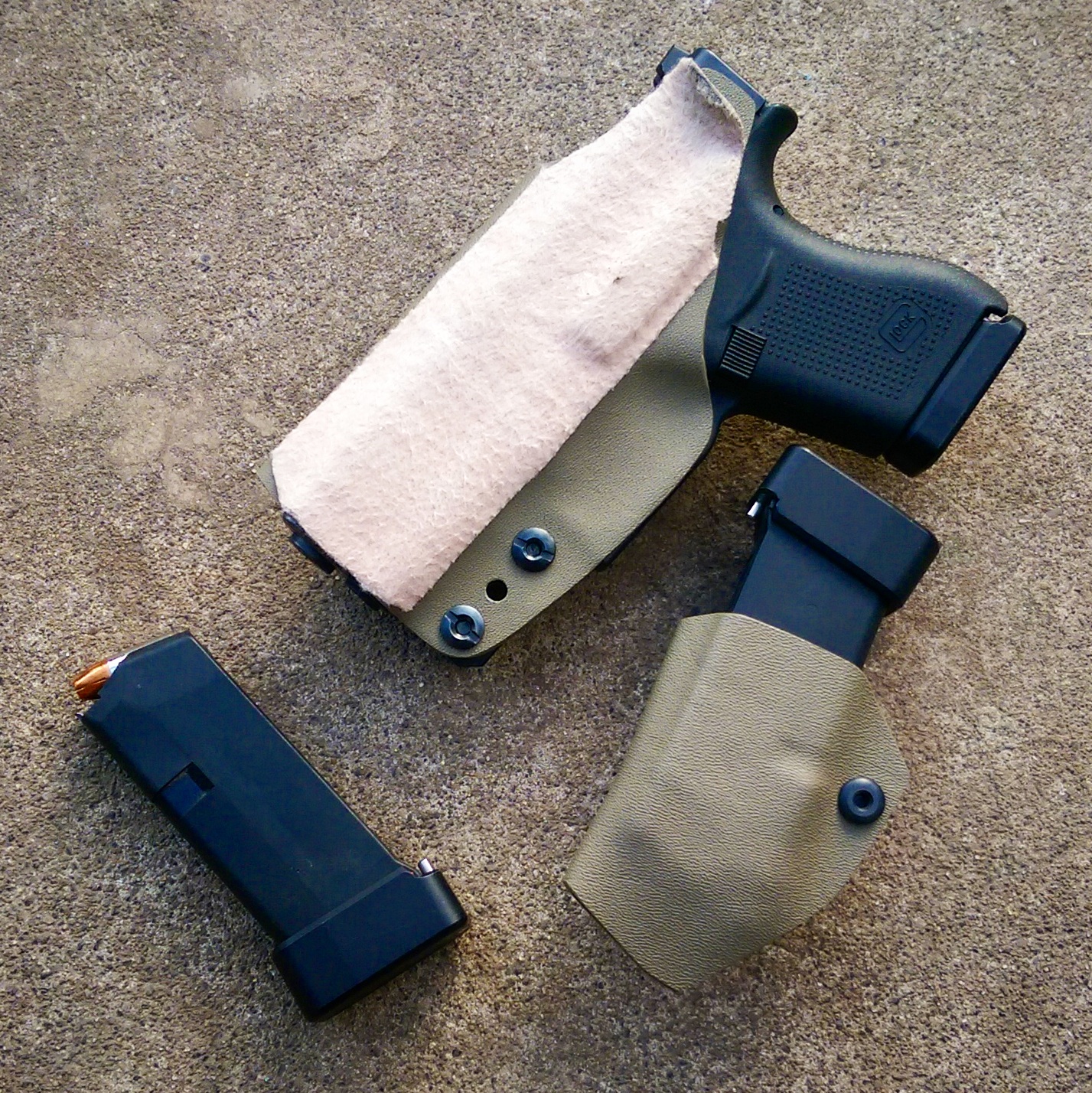 Once we started drawing from our concealed holsters and shooting, I noticed how much of a difference it made to have the stability in your holster. I always knew where my G43’s position was, and since drawing from concealment takes a few more steps than it would from an open holster, anything to assist in speeding up the process could make all the difference. It never moved from the time I drew and shot my G43, so when it came time to re-holster, there wasn’t any guessing as to where it is. 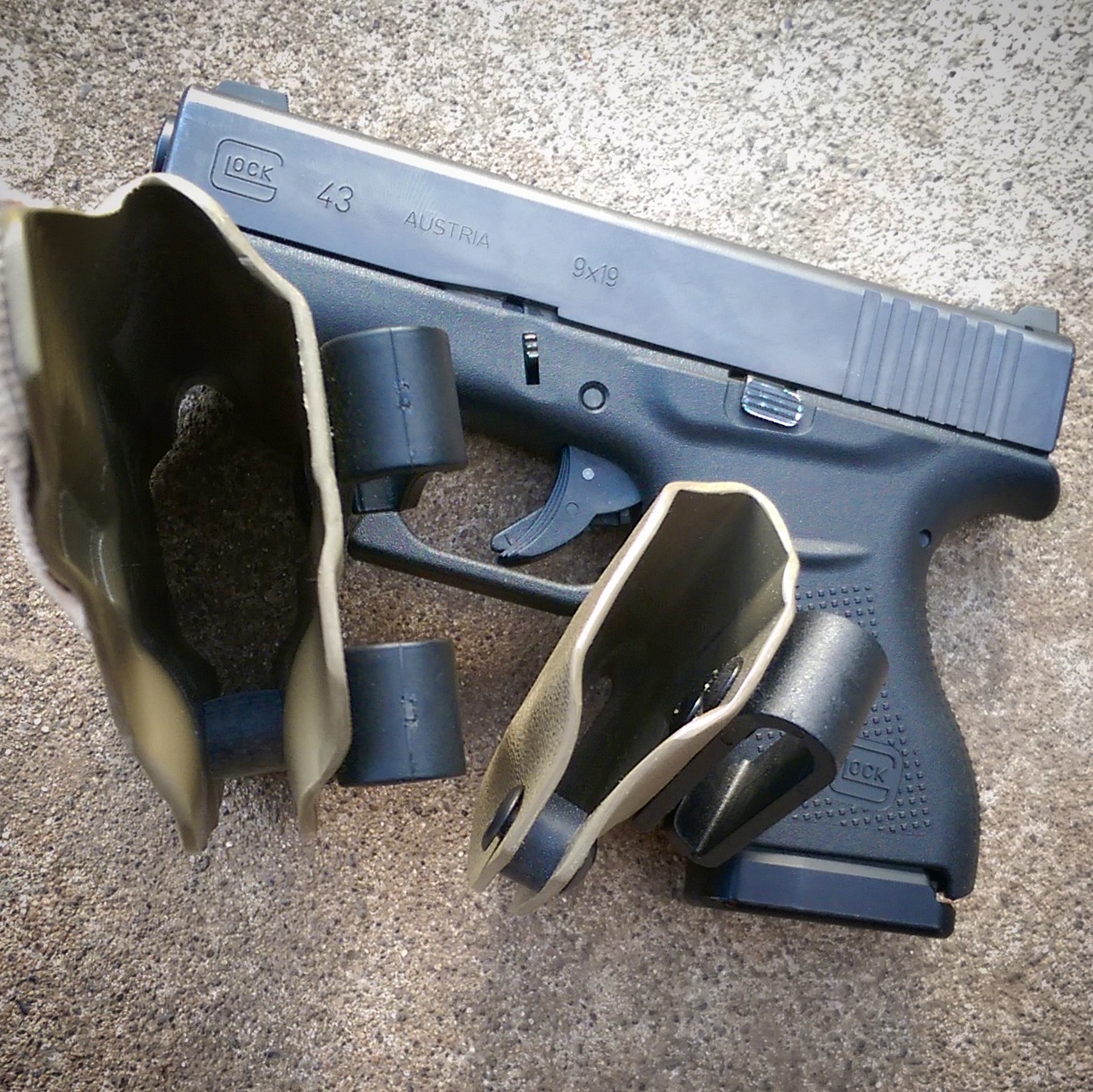 The IWB magazine holder definitely speeds up the reloading process by being in a stable position, also with it being on my support side, I’m used to having my magazines there on my duty setup and all of my pistol setups for that matter. Muscle memory makes drawing my magazine from the IWB holder something I just instinctively do without having to think. 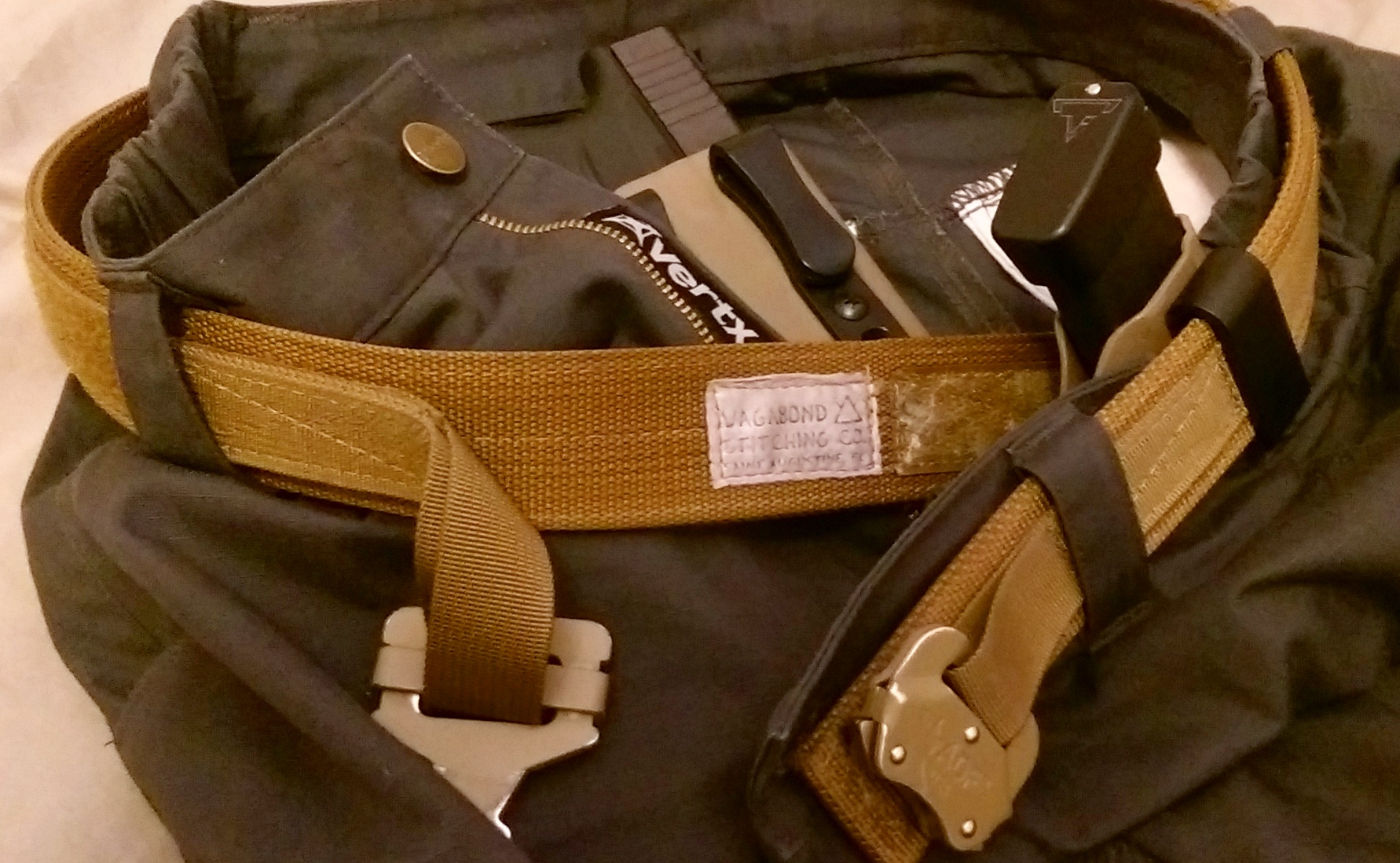 On one of the shoot, reload moving drills, it required two separate reloads and I found it very difficult to find the second magazine that was in my pocket to initiate the final reload.
Mark wasn’t able to attend the class due to work so I didn’t get to talk to him about it during the day. Brett came over during a break and asked how the holster was working for me. I told him that it was working out great and that was when I learned that he was involved in the design of this holster. He always suggests that a good IWB holster should have two clips for all the reasons stated above. 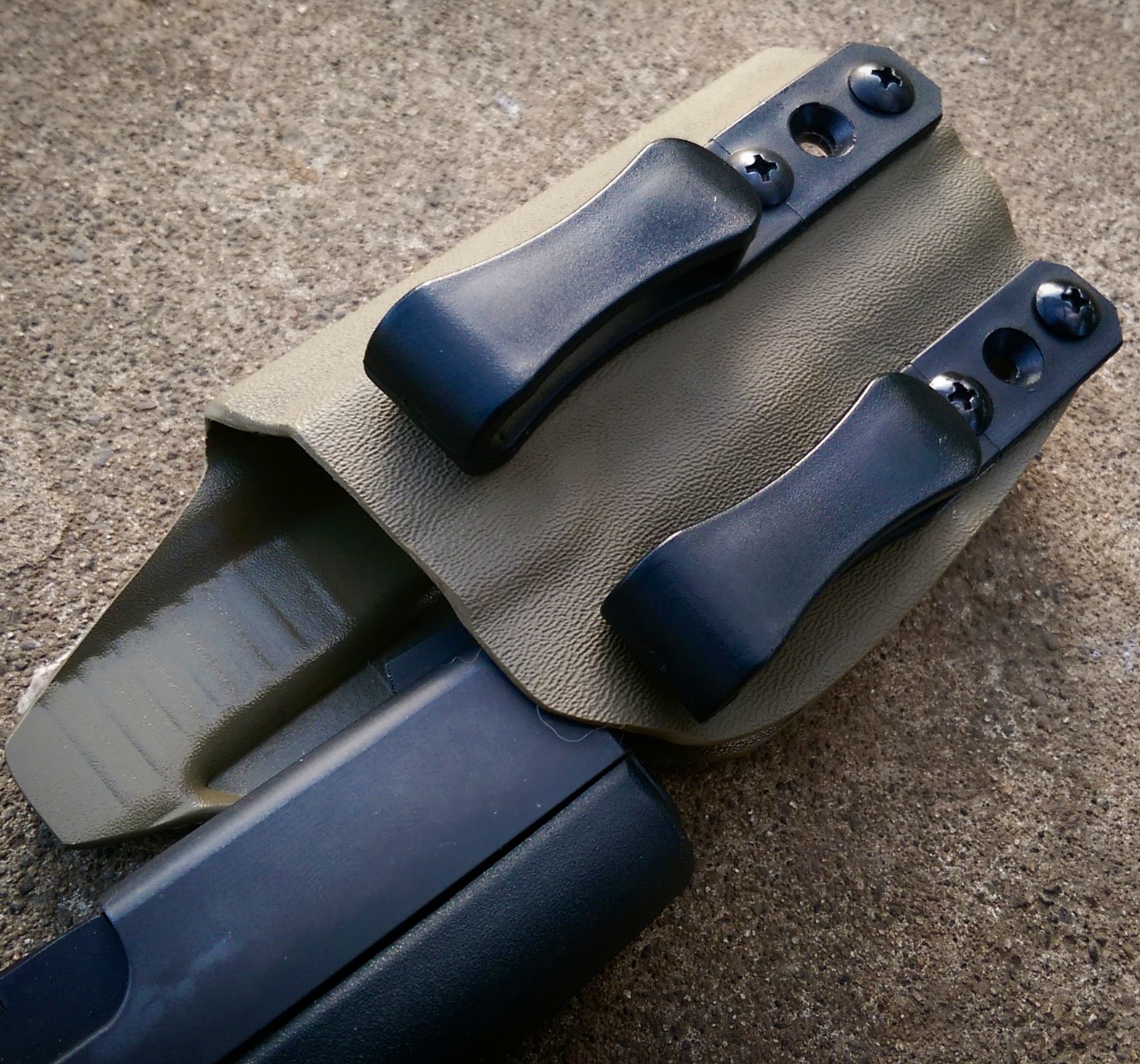 Knowing that Mark collaborated with Brett (a full-time LEO with years of experience and extensive training in this field) tells me that he cares about the quality and function of his products.
The TTP kit is now my Every Day Carry kit. It is light weight, high quality and finished with no sharp edges. Mark is someone who will work with you to make the right solution for your custom kydex holster needs.

You can see his work on his Instagram page @thomas_tactical_precision you can contact him via email:
[email protected]

If you want to read my AAR on Iron Works Tactical EDC Class:

For training with IWT:
www.ironworkstactical.net
Johnny (@rattlesnake44) is the lead instructor.

Special thanks to Mark, Jeff, Brett and Johnny for making it all happen!

Jeff took a lot of pictures and videos of the class, those should be up soon at @muzzleflashmedia