The Fifty Shades of FDE SCAR 17 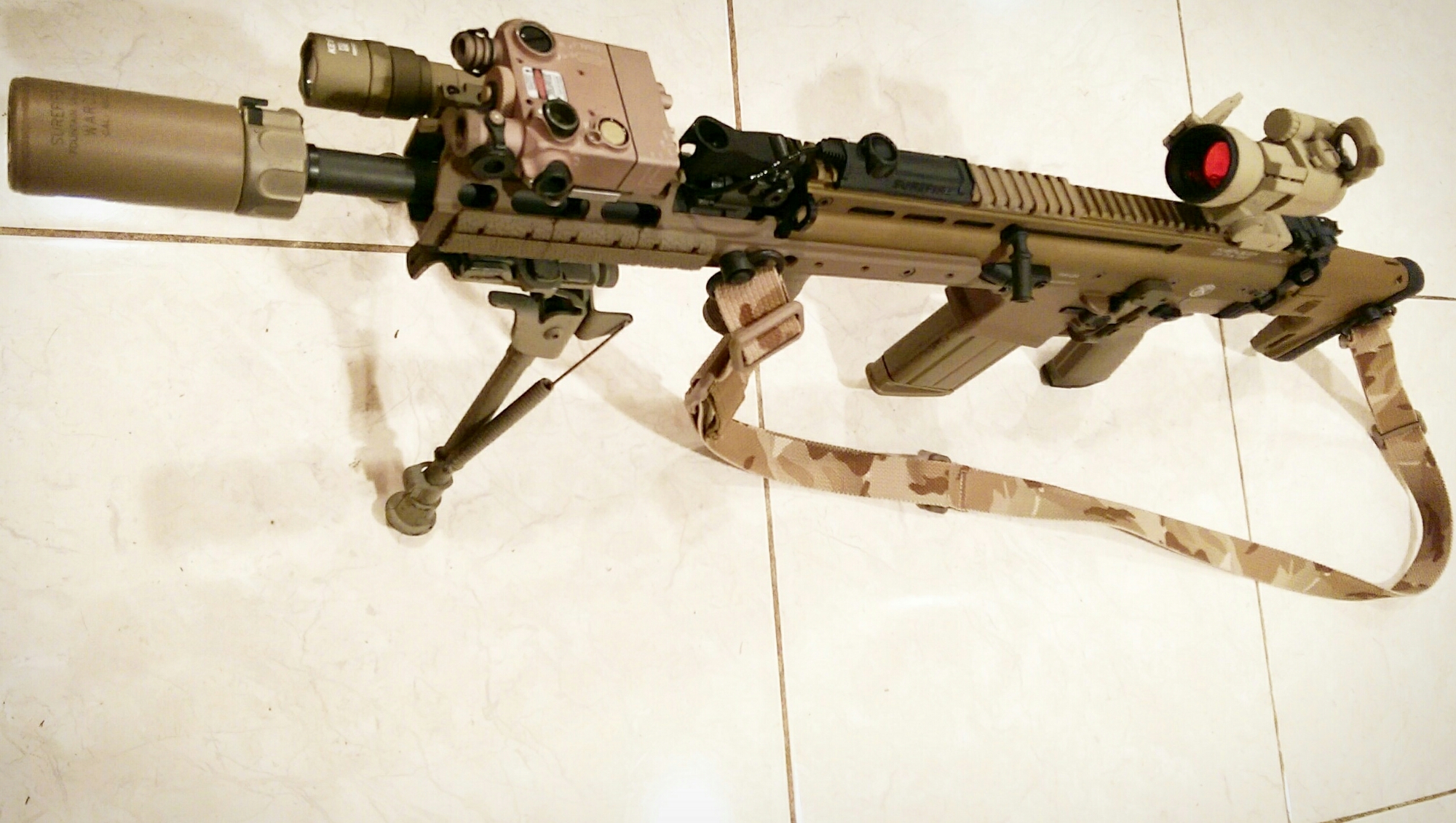 Some of you follow my Instagram Account @fiftyshadesofFDE so you know a lot about this. I started it last year after I got my SCAR 17s in Flat Dark Earth. It’s my public account where I post pictures and videos of my guns and gear. I also repost content that interest me. 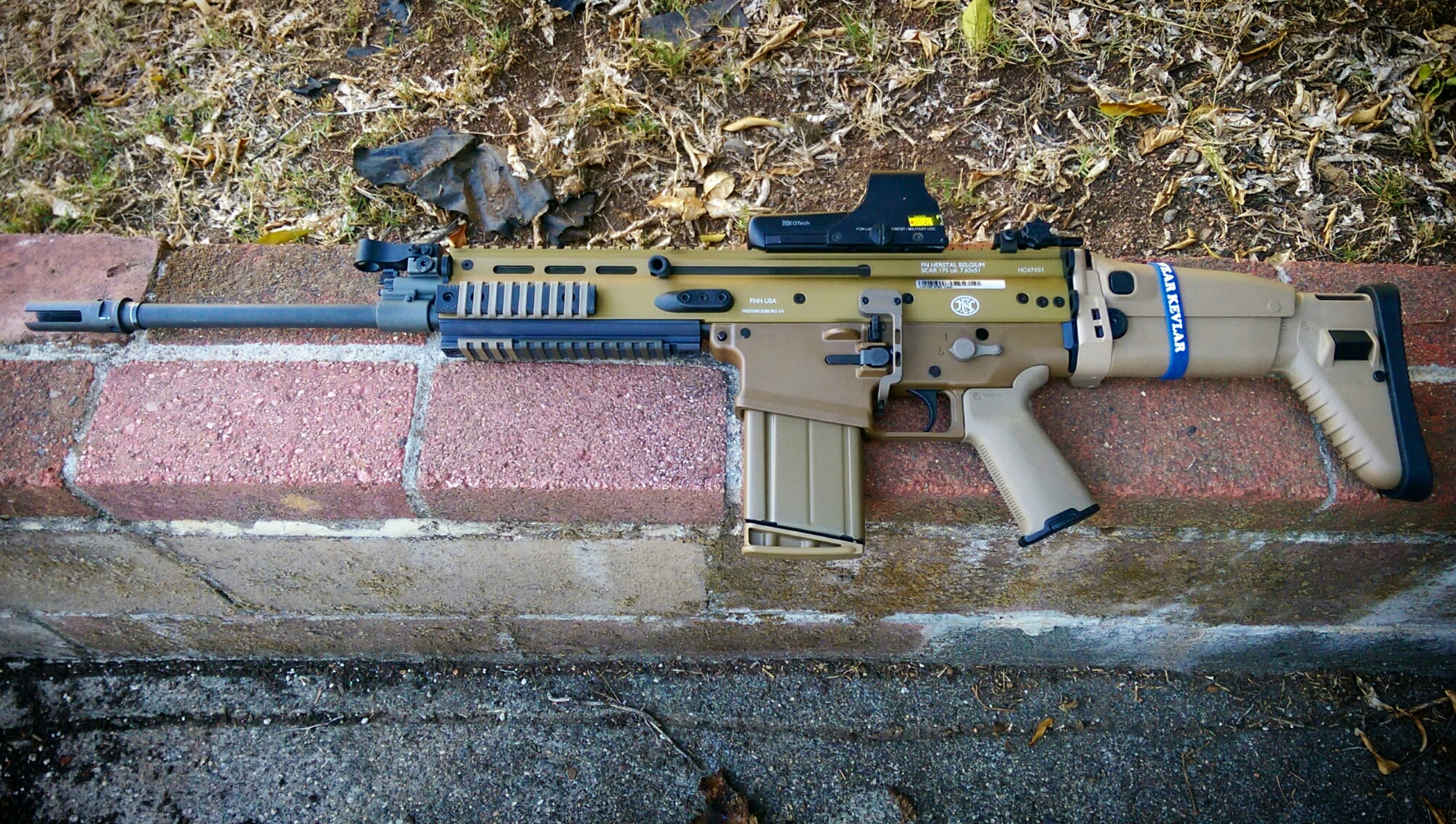 With the EoTech and WarComp

My SCAR 17s has been my favorite rifle that I own and I’ve customized it to serve my needs. For me, it serves as a short to medium range battle rifle. I get a lot of questions about it so I’ll go over all of the after market accessories that make up my Fifty Shades of FDE SCAR 17s.
The easiest way for me to do this is to go from muzzle to buttstock. 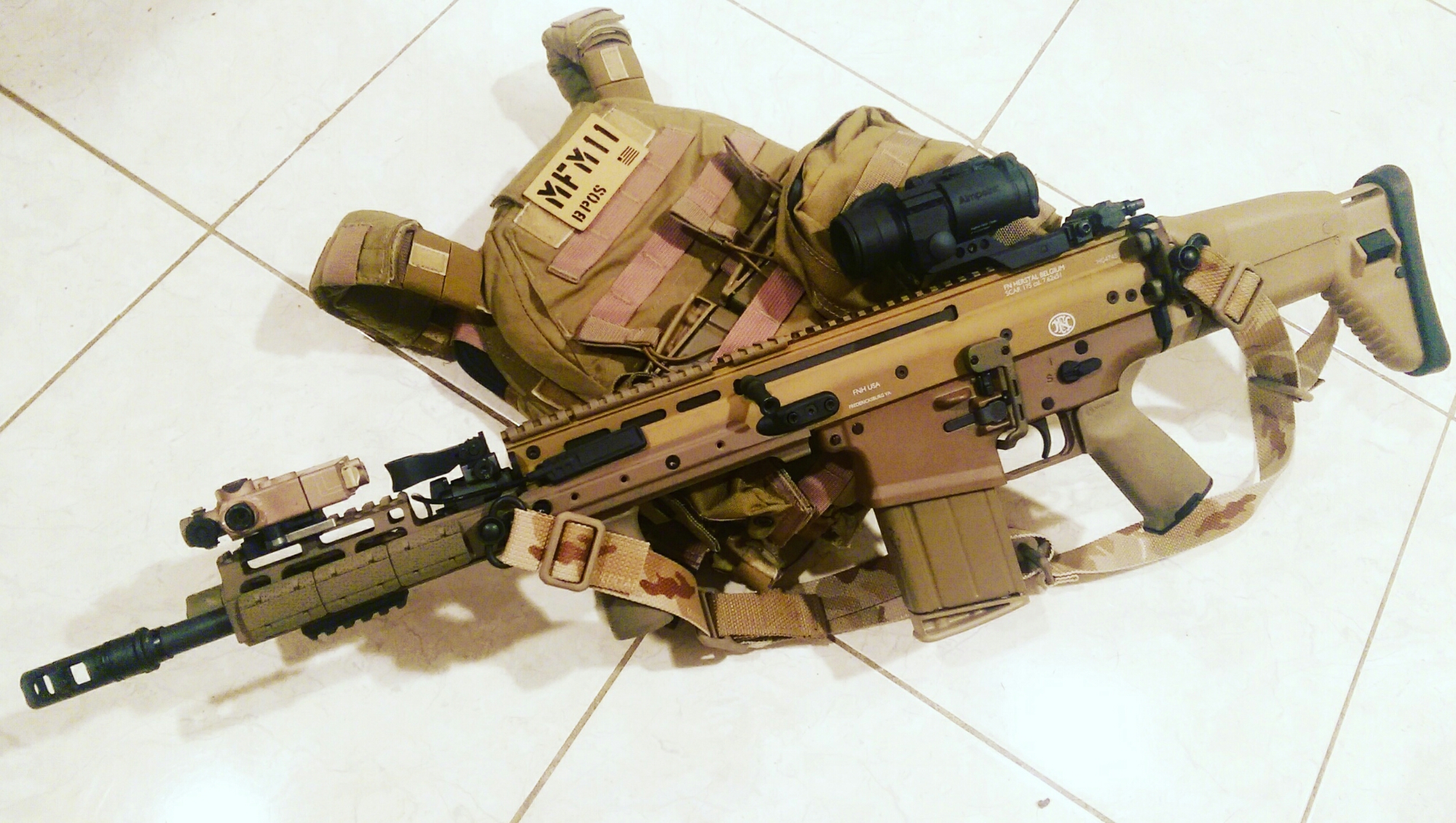 I did make a YouTube video going over the accessories.
https://youtu.be/umsflRq9YAY
At the muzzle, I replaced the PWS FSC30 brake with a Surefire MB762 Muzzlebrake. Initially I had a Surefire WarComp 7.62 on but the felt recoil was something close to a 12 gauge slug. The WarComp works as advertised, it eliminates all flash and keeps the muzzle flat. It wasn’t for me and the Muzzlebrake is what I went with. Muzzlebrakes are great with eliminating recoil but they are simply obnoxious to shoot around bystanders, at the range or indoors. For that issue, I have a Surefire Warden, which attaches to the MB762 with ease. The Warden is not a suppressor but it gets real hot real fast. I asked Jr, over at Burn Proof Gear to make me a cover for the Warden. 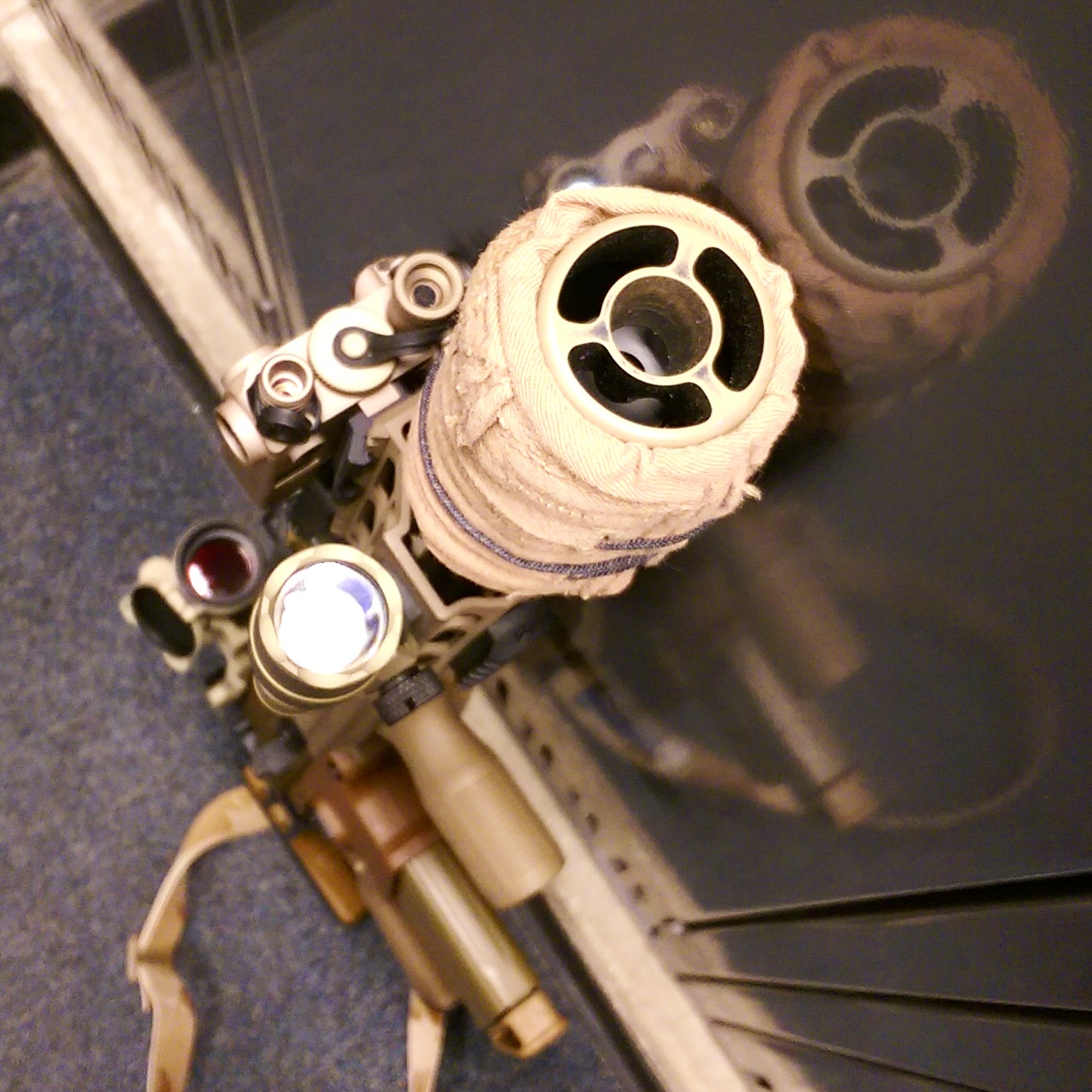 He quickly sent me a prototype and a few months later, I received the final product. (I haven’t had a chance to range test it yet) but I can say that it is well built and solid fit. I will write a review as soon  as I take it out to the range. It is now called the Blast Shield Cover and you can order one here: https://www.burnproofgear.com/product/blast-shield-cover/
Next item is probably the most important in my opinion: the KDG MREX (MLOK) 6.5″ FDE rail extension. You can read my review on that here: http://wp.me/p5LV2Z-3f
Attached to my MREX, I have a Steiner DBal-i2 with Green Laser (this is on loan from a friend and not mine) at the top rail. At the 3 o’clock rail I have a Surefire Mini Scout M300C with a SR07 constant/momentary switch attached to the top rail behind my folded front sight. On the bottom rail, I can attach/detach my Harris Bipod via ARMS throw lever mount. Also at the bottom, I have a Magpul MLOK Vertical Grip.

On the lower receiver, I have a Battery Control Device (BCD) by Parker Mountain Machine. It works exactly like a Magpul BAD lever, except it was designed ground up for the SCAR system. I replaced the stock charging handle to the GG&G angled charging handle. My safety selectors are AXTS/KDG Talon SCAR, given to me from Recoil Magazine for letting them borrow my SCAR for an article for that products’ debut. My pistol grip is a Magpul MOE grip modified by PMM. Standard AR pistol grips need modifications to fit correctly and PMM does that for you!
On top of my receiver, I currently run an Aimpoint PRO with a GG&G cantilever mount that holds a spare battery. I also have a Millett DMS-1 1-4X optic on standby in case I need magnification.
At the very end, I finally got a KDG SAS Stock. KDG takes Magpul ACR stocks and adds a metal adaptor to slide onto the SCAR. It is lighter and stronger than the good ole Ugg Boot but I’m keeping the Ugg Boot because the cheek riser does get higher than the SAS stock for when shooting magnified optics. 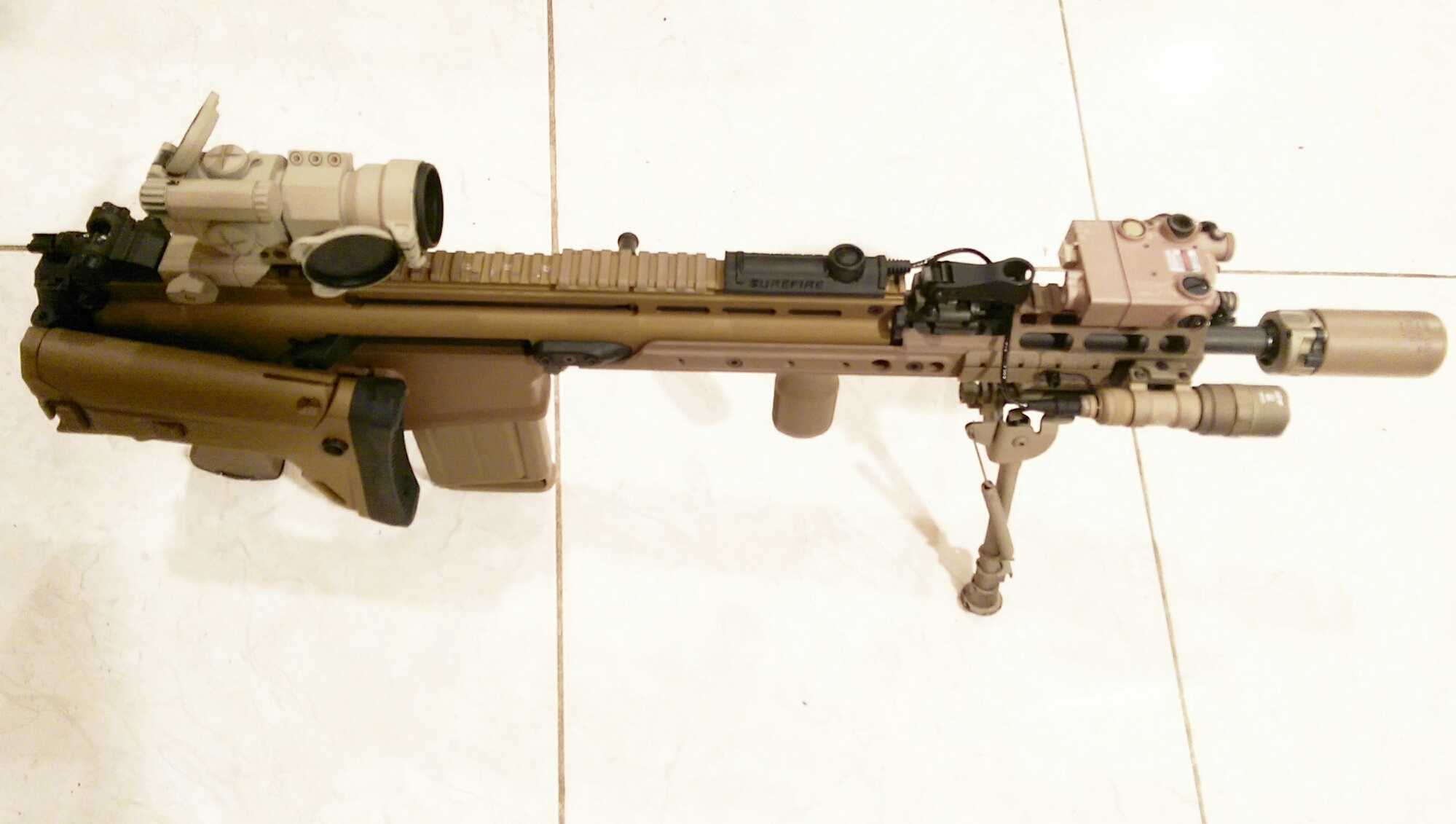 And finally the sling: I run a Blueforce Gear Vickers Sling with QD mounts in Multicam Arid.
There you have it! This is my current setup and I don’t plan on changing much in the future but you never know, I’m always open to new ideas and methods. This system is highly modular and it is always adaptable to fit whatever mission I need it to.

4 thoughts on “The Fifty Shades of FDE SCAR 17”