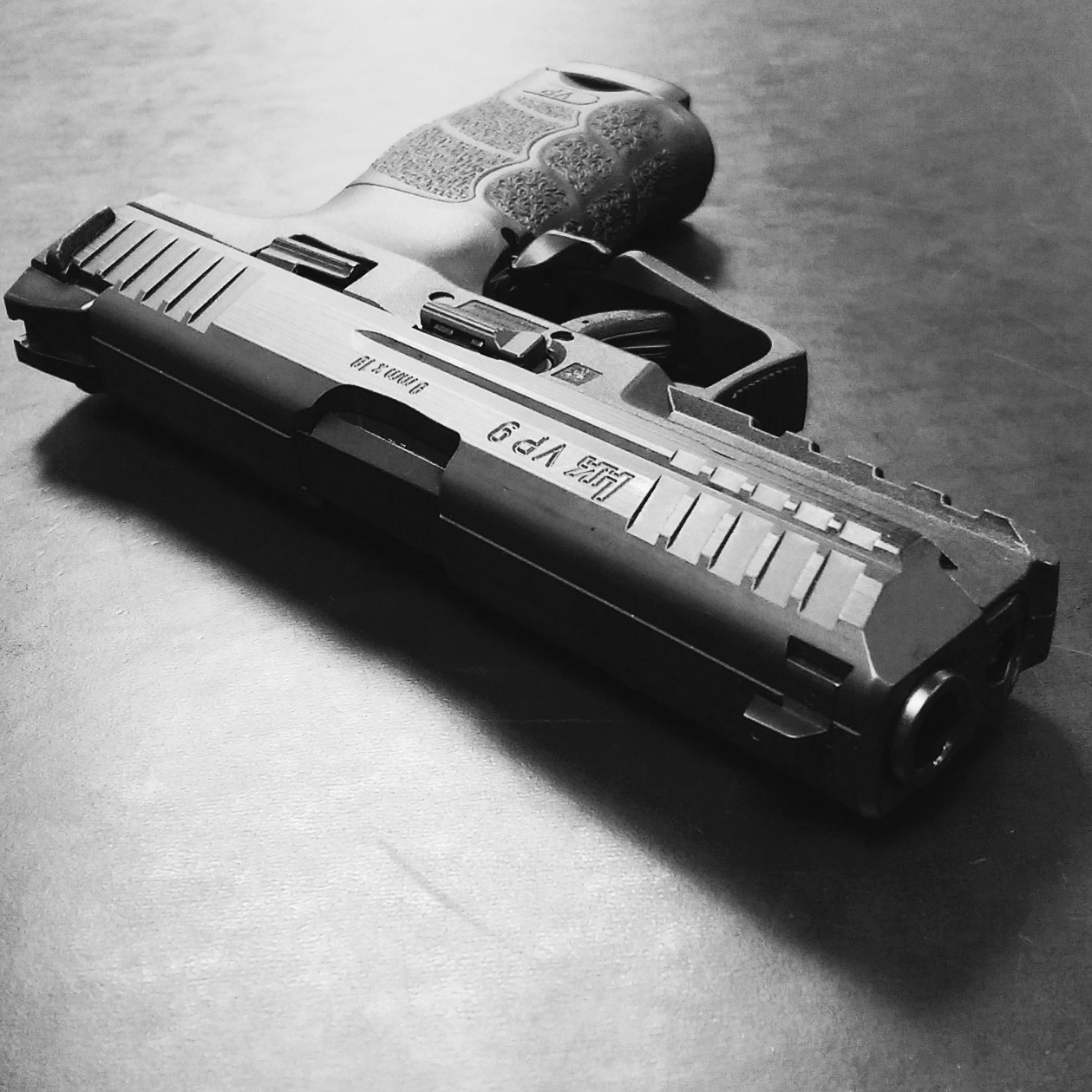 In this line of work, you have to adapt and adjust with the times. When it comes to your gear and equipment, you have to pick and choose each piece that works for you, because you are the end user.
With that said, I have chosen a new duty weapon: the Heckler and Koch VP9 with a Surefire X300U attached. 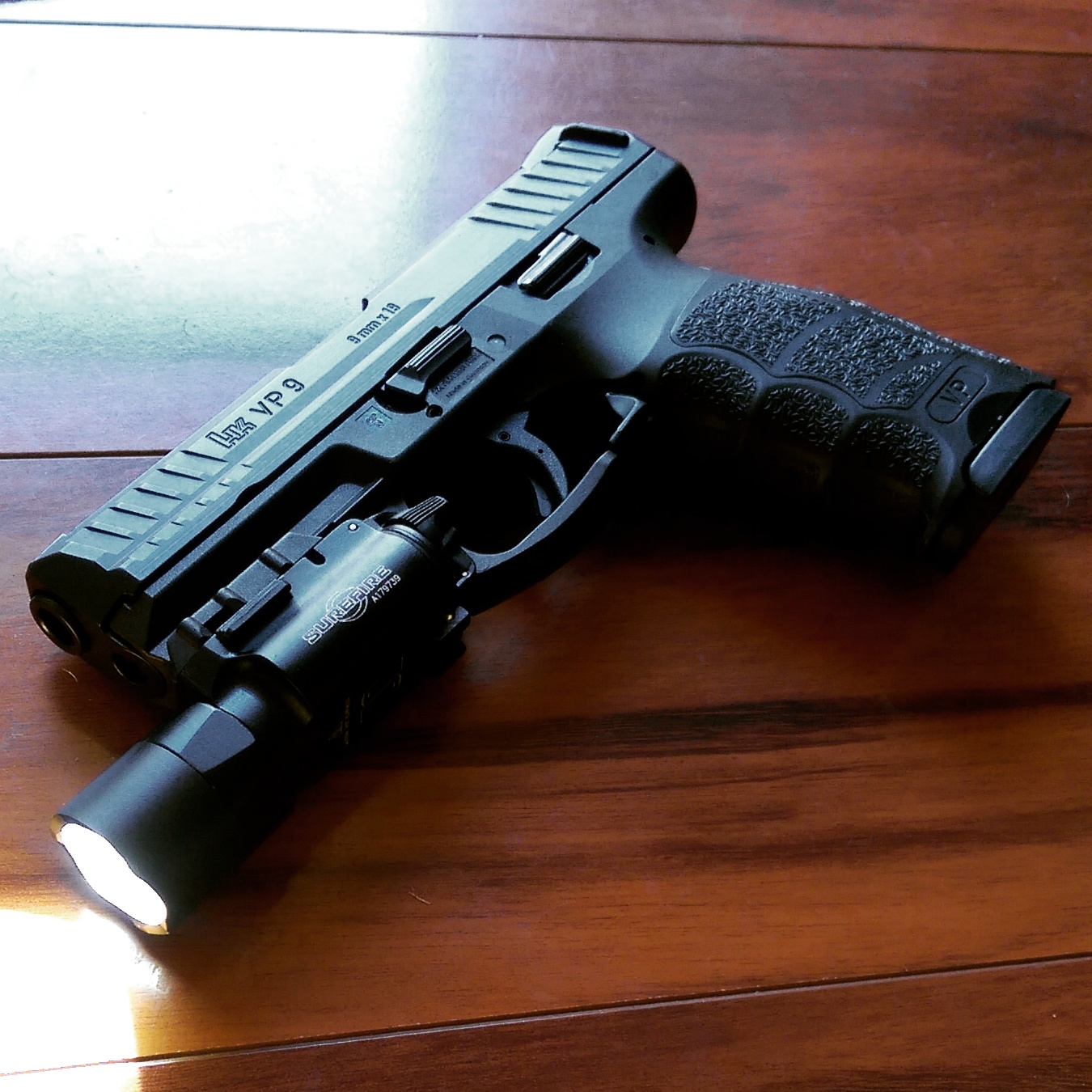 There’s plenty of reviews on the VP9. I’m just going to give you my own observations I’ve had with using this weapon system since I got it a few months ago and why I chose it over my Sig Sauer P229R.
When the VP9 first came out, I could’ve cared less about it, thinking it would be like another Glock. I wasn’t too fond of striker fired pistols because I never really liked the trigger. There are a lot of similarities to a Glock, however, there are many features that HK put into the VP9 that caught my attention. First of all the trigger is clean and crisp out of the box and feels a lot lighter than the 5.5 lb pull weight and it had a positive reset. The side panels and backstrap are adjustable, therefore improving the handling of the weapon. It is a fully ambidextrous pistol with the slide release lever on both sides. The magazine release is improved from the one on the USP, being a bit longer and easier to reach at the rear of the trigger guard. I didn’t get the Law Enforcement model with night sights because it wasn’t in stock at the time. I got the standard model with luminescent metal sights and they are extremely bright in the daytime and in low light, will glow brightly for several minutes. They can be recharged with a quick burst of light from a flashlight. This isn’t an issue for me since I have a WML attached. I plan on replacing the sights with Trijicon HD night sights in the future, but for now it works for me. Underneath the rear sights, there are unique plastic tabs that assist in racking the slide.
There is a loaded chamber and cocked striker indicators, which are nice features just to have.
I had a lot of dry fire practice with it and took it to the Falcon Ops Group LEO 1.5 Pistol Deployment Course, where I shot it for the first time. I shot over 500 rounds without fail. I did however run into an issue with my thumb placement on the slide release lever. I noticed that it wasn’t going to slide lock when it was empty. I quickly adjusted my where I placed my thumb and haven’t had an issue since.
So why go with the VP9? The biggest advantage the VP9 had over the P229 is the trigger. A striker fire system is much simpler to operate than a DA/SA hammer fired system. I no longer have to pull a 13 lb trigger or have to decock the hammer before I move or reholster, all I have to do it draw fire and reholster. I was used to the DA/SA but if it could be simpler, why not?
The VP9’s magazine capacity is 15 over the P229’s 13. The VP9 uses the same magazine as the P30 but let me tell you, they are like unicorns, extremely scarce. I was luckily able to grab a few more from RifleGear.

I had the Surefire X200b on my P229, which outputs 80-100 lumens. The new X300U on my VP9 outputs 300 lumens giving me over three times the power!
Since the VP9 was released late last year, Safariland was working on a duty holster solution for it. I was emailing Safariland back and forth to get them to make a duty holster that will also accommodate the Surefire X300U. They came through and I special ordered it from Tactical Pro Shop. The Safariland level 3 holster for the VP9 fits like a glove and is much more secure than the level 2 for the P229. The P229 had a tiny bit of wiggle room and would rattle with each step as I walked. The ALS on the VP9 keeps it snug and quiet.

The VP9 is significantly lighter in weight than P229. The moment I switched duty weapons, I could feel the difference.
Before you can carry any weapon, especially your duty weapon, you need to have it inspected by a department armorer. After being approved, you need to qualify with it right away. My VP9 was the armorer’s first one he had ever seen. He took his time going over it and was impressed with it after he took it apart. Qualifying was a breeze with it and I didn’t have to worry about that heavy first trigger pull or decocking the hammer.
As of right now, I am the first and only one in my department carrying the VP9 on duty.