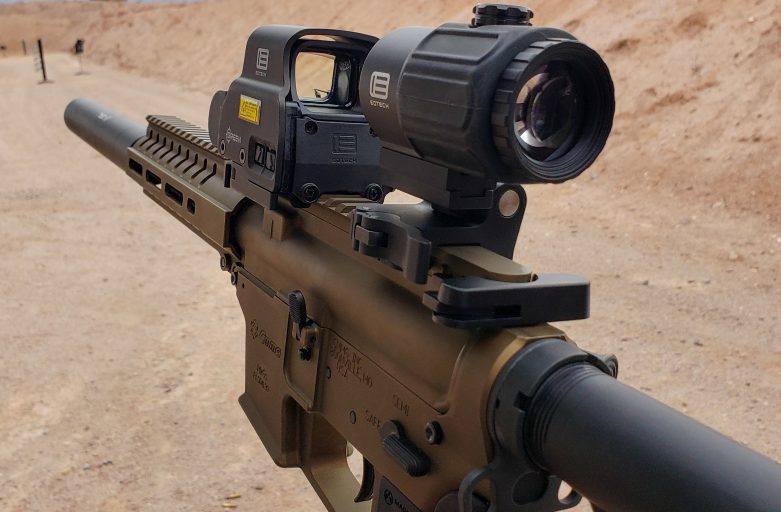 By: Fifty Shades of FDE

I am back in Vegas for SHOT Show 2020. Today was the Industry Day at the Range. If you’ve never been, it’s like a test drive of the latest products in the Industry where ammo is provided and you don’t worry about cleaning any weapons afterwards.

I stopped by the Eotech booth to check out their new magnified optics.

The G43 is a micro version of their proven G33 3X. It is one of the most compact and light weight magnifiers. It features adjustments without the use of tools. The glass is clean and crisp just as the G33 and it makes shooting the targets at the end of the berm an easy task with greater accuracy. 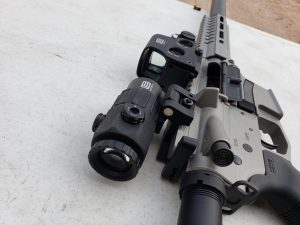 Need more magnification? No problem! The G45 gives you 5x the magnification in a similar sized package of the G33. That extra 2x magnification allowed me to see the targets closer to get more precision on my shots.

On the LPVO or Low Power Variable Optics side, the Vudu 1-8×24 SFP (Second Focal Plane) scope has 2x more magnification over their 1-6×24 FFP with a simpler reticle that stays the same no matter the magnification level. Getting zoomed in at 8x made hitting the steel targets a piece of cake and the throw lever is probably the best on any LPVO that I’ve used.

I also took a look at the Vudu 5-25×50 FFP with the Horus H59 reticle. This was released a little over a year ago and I shot it on top of a 5.56×45 bolt gun that was suppressed with a GSL Technology suppressor. The whole setup was a great matchup. I was hitting the hostage target with ease and the suppressor took out a lot of the noise and recoil.

The Eotech HWS is a very fast system for CQB and when you need to reach out further or get more information for PID, the flip on magnifiers are very versatile and the Vudu line gives you a more traditional scope with even more magnification. Eotech seems to have you cover from short to longer ranges with their high quality optics.