I saw YouTube video where the two guys in it were discussing the relevance of a .308 battle rifle for civilian ownership and usage. They didn’t think it was for civilians, but it was for the military. 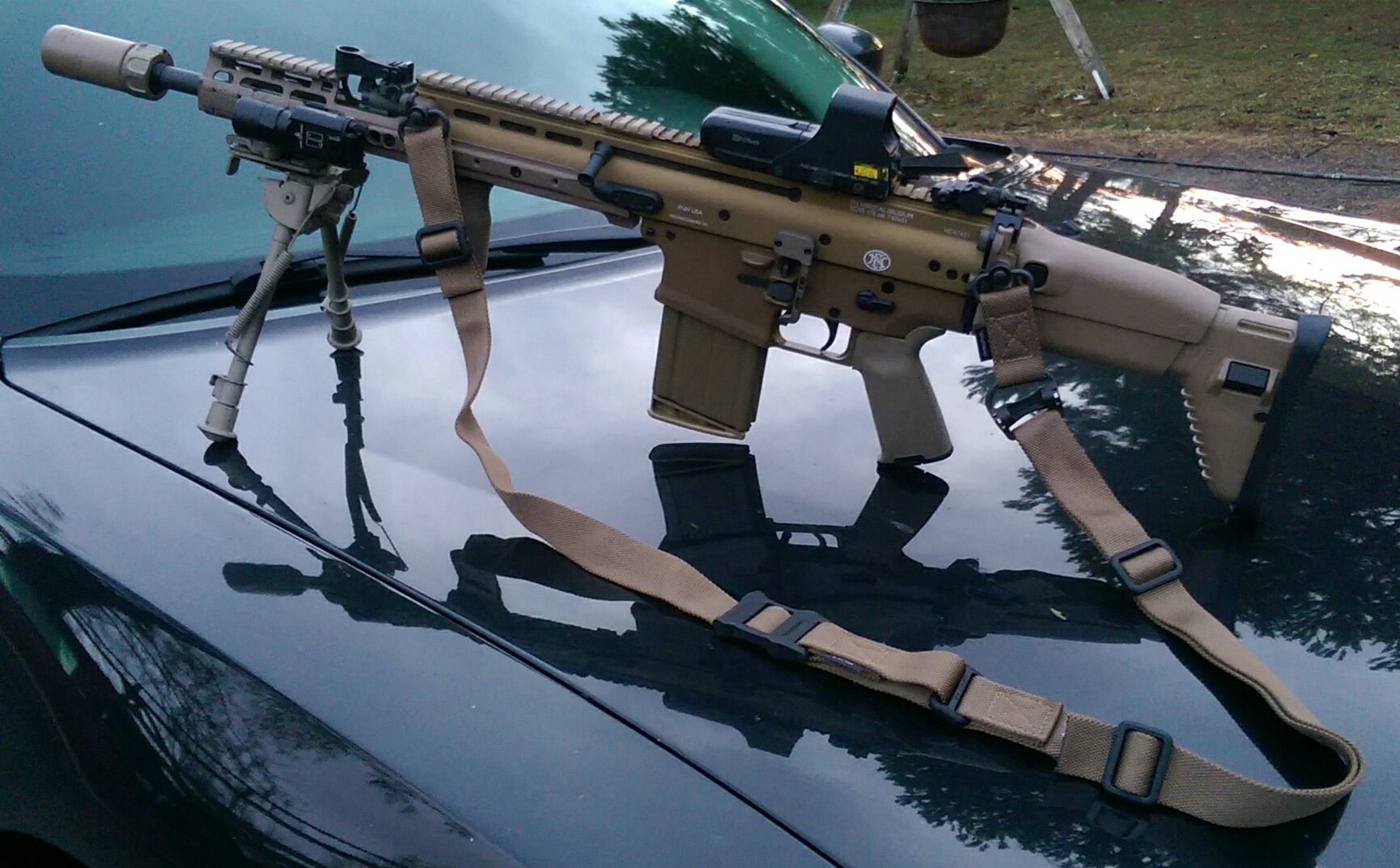 They had some good points but I think they are wrong. In my opinion, .308 or 7.62×51 battle rifles are very relevant for civilian ownership and I’ll explain my thought process.
First we need to get the negatives of the .308 platform over the .223:
1. Magazine Capacity is usually limited to 20 rounds vs. 30. (in California and some other states it’s 10 regardless and makes this a mute point, so it’d be an advantage over the .223)
2. Weight of the rounds/magazines/rifle are always heavier.
3. Cost of Ammunition is on average .70 per round vs .50 and below for .223 (this is an non issue when you buy by the case, cost can get down to .40 per round)
4. Overpenetration. A .308 FMJ has the potential to overpenetrate (a negative for home defense and a positive in most other engagements)
With that out of the way, let’s talk about the advantages a .308 platform gives the civilian shooter or anyone utilizing it over a .223.
It makes up for all of the negatives in one huge area: ballistics. The .308 round out performs a .223 in every aspect: effective range, accuracy in adverse conditions, effect on targets with an average .308 round delivering about 3 times that of a .223 in weight. I myself have never been in combat so I can’t tell you from personal knowledge how rounds effect those who are trying to do you harm. From numerous interviews that I’ve seen of our service members, it’s not unusual to hear them say that they would normally put three or more rounds with a 5.56 rifle to ensure the threat was no longer a threat.
Sure, there’s JHP ammunition available to give the .223 round better ballistic capabilities. Then there’s also JHP’s for .308, which will make it much more effective than a .223. When there’s no JHP available, the standard M80 ball 7.62×51 or standard .308 ball ammunition is king. You can also hunt most game with .308 whereas you’re very limited on what you can shoot at with a .223. 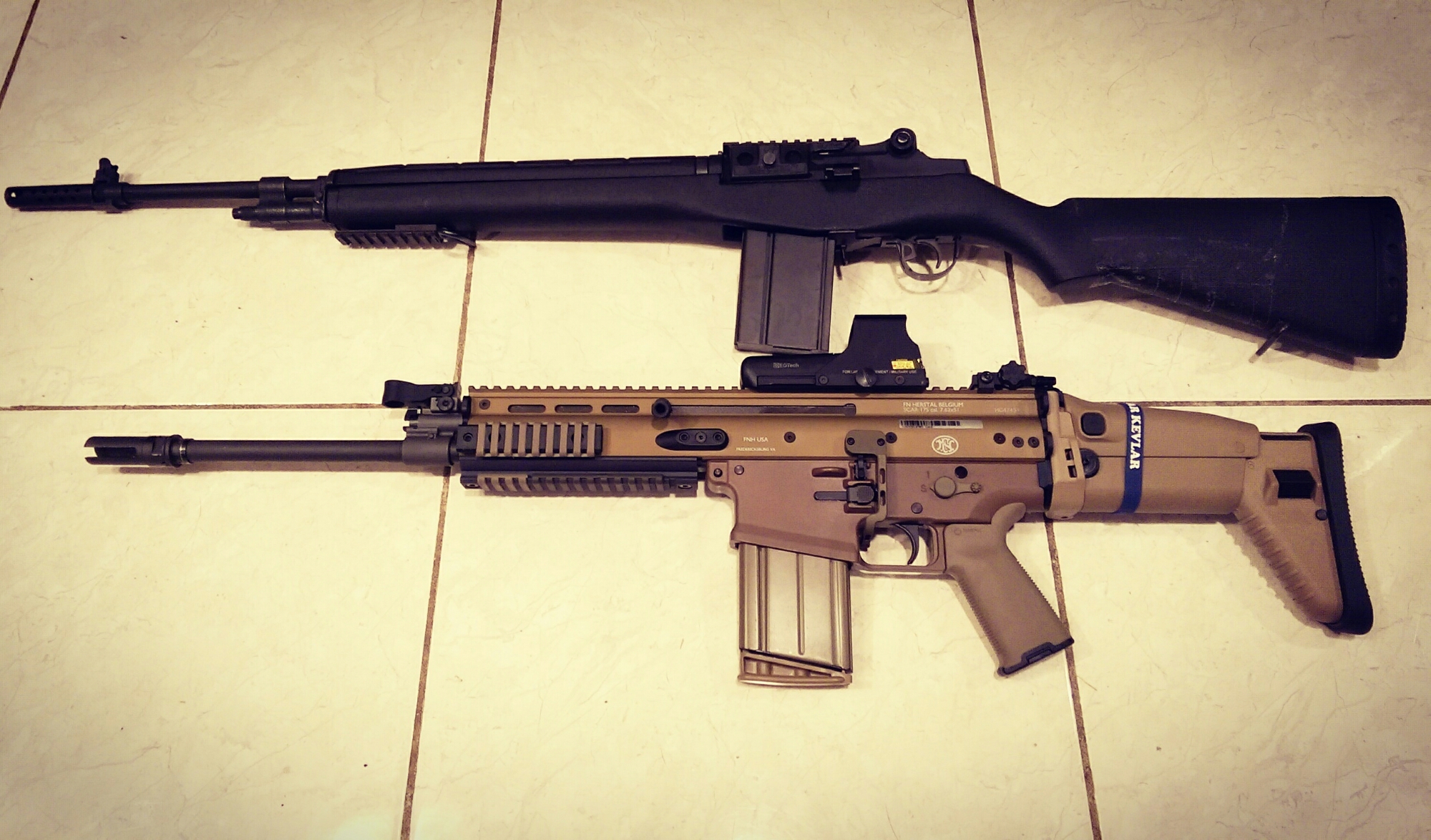 I own both M1A and SCAR systems
in .308. I will say that the M1A was very capable at medium to long range engagements but it was too unwieldy for close up work. It was best fired from a kneeling or prone position, standing took a lot of practice and arm strength.
This is why the SCAR 17s was a weapon system had always been on top of my list of guns that I wanted. To me it’s the ultimate battle rifle and it kind of is for everyone else. It’s light weight and very ergonomic that allows it to be run as a CQB weapon and keeps it’s long range qualities as well. It’s a jack of all trades and it’s a great weapon system that is accurate, reliable and proven- not by me but our USSOCOM soldiers and sailors on the battlefields of Iraq,  Afghanistan and all over the globe.
Back to the civilian world. I’ll give one scenario as an example: the freeway ambush. This is a scenario that I’ve thought about long before it was recently brought up on CNN with the arrest of the man who assisted the San Bernardino terrorists. He was part of a plot that never took place thankfully but it can easily happen. Their plot was to hide out in the hills overlooking the 91 freeway armed with rifles. They would stop traffic with IEDs and then open fire on the stranded motorists and responding first responders. If I was one of those stranded, I’d like to have my SCAR 17s to return fire at the terrorists who may be at least a hundred yards or more away. A .223 platform just isn’t enough firepower in my opinion to adequately meet this threat because you’re already at a position of disadvantage.
I can go on all day long about different scenarios but you get the picture. .223/5.56×45 is a great platform and the .308/7.62×51 doesn’t replace It; it augments it, but if it’s your only rifle available and you’re on your own, which would you rather have? I know I’d want my SCAR 17 over my M6A2 any day. 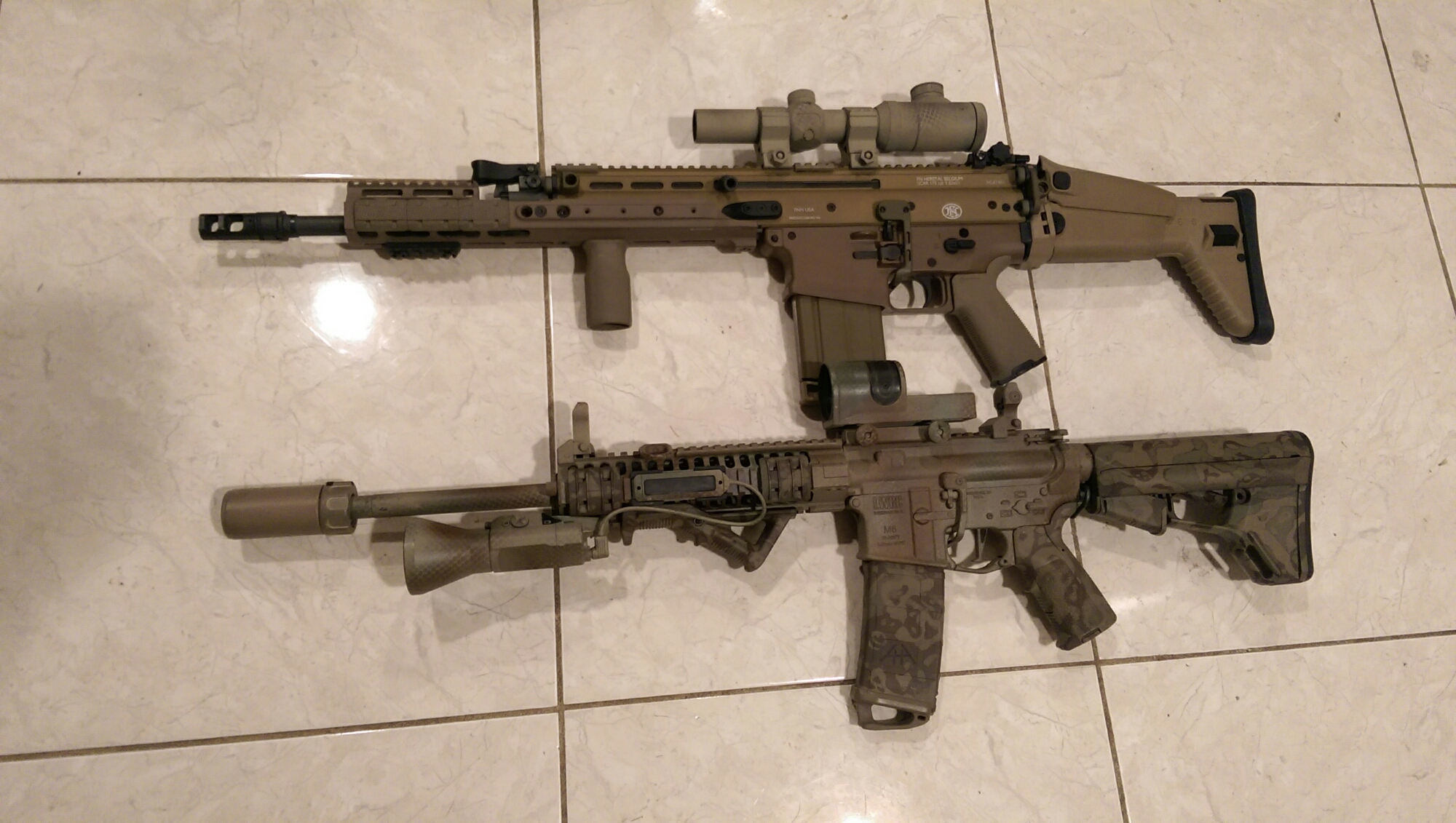